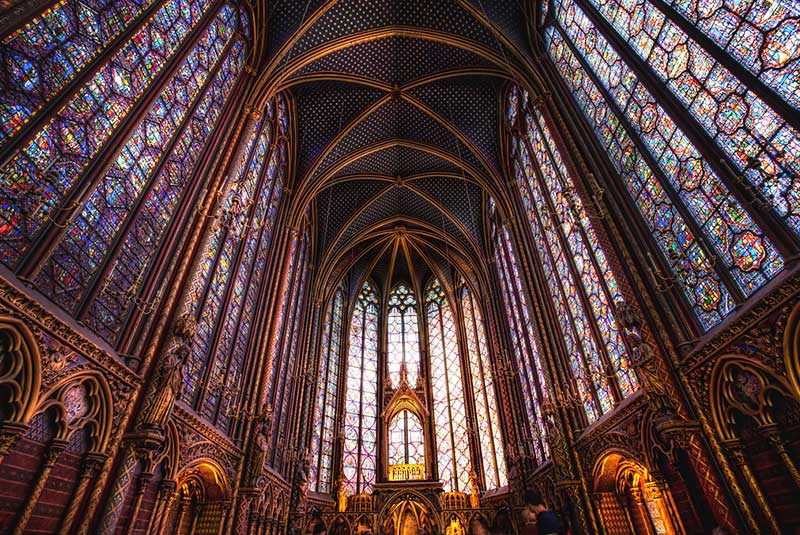 Church of Saint-Chapel, Paris
Architectural style: Gothic
The Church of Saint-Chapel dates back to the 13th century in Paris, and some of them are considered as gothic gothic architecture. The construction of the two-storey Church of Saint-Chapel began in 1240 and ended in a short period of 7 years.
In appearance, the Church of Saint-Chapel has a small building, but a spectacular spectacle of the style of the French Gothic Rayonnant. For the church’s facade, small stone carvings and 15 large windows were used, and one century after its establishment added a round-shaped window like rose, which, unlike other windows, was also used in green. . The upper part of the church’s glass is about 600 square meters in size, and their stunning designs display the images of the gospel, which are both the Old Testament and the New Testament. If you look more closely at this form, you will notice that approximately 1,130 designs of the Bible are depicted in two colors: blue and red.
The colorful windows of this church, in turn, are spectacular, and their last restoration lasted about 7 years. During this time, the large windows of the church were pulled out and separated so that their work could be done more easily and carefully. The laser was then used to clean the pieces, and they drew a glass cover so that they could protect them from pollution and increase their lifespan without changing the appearance of the windows.